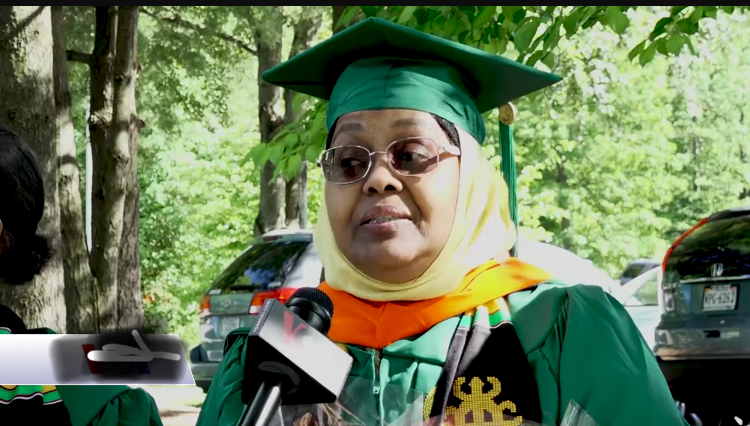 Falhad Mohamud during the interview. (Courtesy)

WASHINGTON DC, US—A 60-year old Somali mother made the most talked-about comeback after she graduated from college with Masters of Computer Science from George Mason College in the outskirts of Washington DC.

Born in Somalia and relocated to the United States in early 80’s, Ms Falhad Ahmed Mohamud said it was her father’s parting advice to continue with education when she left Somalia in 1980.

Despite trying hard to continue with studies, Falhad faced a stumbling block that changed her priorities.

“I started having babies and I just found it hard to fulfill my dreams of attaining further studies,” Falhad told VOA Somali shortly after her graduation, flanked by her first-born daughter who renewed her mother’s ambition once again when, unknown to her mother, she signed her up for classes.

“I was home one morning when my daughter came to enquirer for my details such as birth-dates, address and social security number,” Falhad says.

“Days later, she asked me to accompany her. She took me to the bookstore and bought me my first book-bag,” she added.

Unbeknown to Ms Falhad, daughter signed her up for college classes, perhaps to make up for the lost opportunity she caused on her birthday, four decades ago.

Ms Falhad states that her return to studies was informed by a long held belief that education is a catalyst for sustainable development.

“Education is very important and that’s why I had to come back and continue with it,” Ms Falhad said.

She was at the same graduation event with her youngest daughter, 25-year old Amina who graduated with Bachelor of Science, Information Technology.

Amina was born in 1993 at the height of Somalia’s civil war. Her father was killed during a brief visit to Mogadishu. She never saw him, but the double excitement—her graduation and that’s of her mother—concealed the pain of not having him around to share the historic moment.

“I’m excited beyond words,” Amina said, visibly excited and clearly fighting back the outpouring joy that defined the moment. It was a perfect picture of proud daughter standing tall next to a joyous mother who pushed the limits of possibilities and regaining the spark of life.

“I told my colleagues that I was graduating with my mum and they were all excited. When she walked across the stage, we all screamed for her and it was perfect,” Amina recalls.

Ms Falhad is a single mother who brought up two daughters. She said she worked hard to have them attain their dreams, an opportunity she lost at the earlier stages of her life.

“I inherited wealth from my father. I want my daughters to remember me for the hardwork I put into their education. Today, they are independent women. The academic certificates they possess is my pride and legacy, “ she said.

It’s a daunting task to graduate from college in the US. Most students work and at the same study for their college degrees, a juggle too hard to maintain.

Graduating from a four-year college in four years may sound like a fairly straightforward venture, but only 41 percent of students manage to do it, a study by the National Student Clearinghouse Research Center seen by Kulan Post states.

“You study for the joy that comes with this day,” Amina says.

Ms Falhad now wants to advance to PhD alongside her eldest daughter whom she plans to graduate with.

“I may graduate while am 67-years old. Who knows!” She laughs.

Ms Falhad plans to go back to Somalia and teach at schools and colleges. She said the reasons she rejoined college was to learn and pass on the knowledge.

“I’m in my retirement age and I will find joy in sharing what I learnt,” she states.