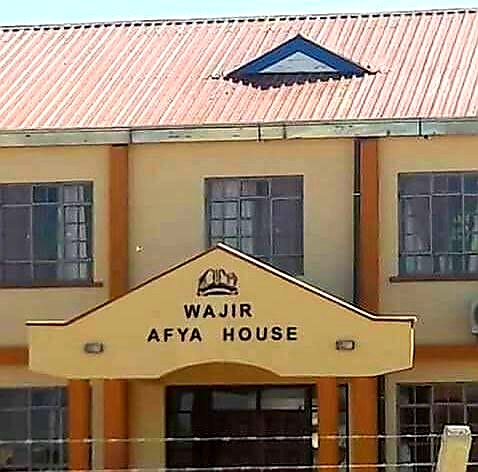 WAJIR—Wajir Refferal Hospital has been on the news over the last one week for all the wrong reasons, and just like in the past cases, politics has taken a centre-stage.

The facility, first built by the Italians in the 1940’s, has caused the fall of a governor and is partly gathering bad publicity for the new one.

Wajir’s second governor, Mohammed Abdi was impeached by the county assembly mid last year for failing to manage the health sector. It was then moved to the Senate where a House committee chaired by Nyamira Senator, Okong’o Omogeni had found the governor culpable of running down the health care system in the county thus compromising the right to health of the residents.This is after 25 Senators out of 47 upheld the impeachment of the Governor by the County Assembly.

The morning after Mohamed Abdi’s impeachment,  his deputy Ahmed Ali Mukhtar alias Werar was sworn-in to office as the third governor of Wajir. The same day, Governor Ahmed accompanied by the County Secretary Abdullahi Hassan met with Department of Health staff led by CEC Hussein Sugow and chief officers Adan Enow for public health and Mohamud Sokor for medical services to discuss critical concerns within the department. They had meetings with healthcare service providers, unionists and the management of the Refferal Hospital in a bid to end  work boycotts.

“I would quickly put in place measures to address issues raised by the staff to restore health services,” Ahmed promised.

Days later, a new generator was brought in. Seven months on, reports have again emerged on how the refferal facility is functioning without running water and electricity.

However, the hospital CEO Dr Bashir Mohamed said the power outage was a commonplace in the town, admitting that the matter was only worsened by technical problems developed by the back-up generator.

“I am aware there have been outages like the rest of Wajir, it is a KPLC problem. It is not a norm, there has been power outages before. But sometimes the hospital has been using a backup generator but it also developed a problem because of the outages. I can however confirm that there have been no lives lost,” Dr Bashir told Citizen TV in a statement.

As the debate on what could be the problem with the main county refferal health facility rages on, the focus is now shifting from the “incompetency of the governor” to the infamous “cartels at Afya House.” People are wondering how scandals at the health department remains the constant issue for two consecutive administrations.

“The health department is the soft spot to attack on any administration because it serves all,” Jibril Abdullahi, a social activist told Kulan Post.

Asked if there are clique of individuals at the Afya House who use their authority to frustrate the governor in a bid to tarnish his image and that of the administration he leads, Jibril agreed.

“Absolutely,” he said. “Most of these officials (at Afya House)  either own private hospitals or have some arrangements with them. So, a well functioning hospital in the town is not to their advantage,” Jibril noted.

His sentiments was supported by the MCA for Waberi, Rashid Mohamed who said the well connected top officials at Afya House sometimes cause a crisis to put pressure on the executive.

“Yes, I have a feeling they’re cartels at Afya House but the buck stops with the governor. He should have put that department in order long ago.

“General failure by the department and use of the health sector for political gains is a true phenomenon in Wajir,” the outspoken MCA added.

“All blame should not be on the governor,” warned activist Jibril Abdullahi.

I have made the following changes with immediate effect in order to improve services in it's entirety in the County. pic.twitter.com/DPSVeLx2Jv

To remedy the situation, the department procured new, more powerful back-up generator for the Wajir Refferal Hospital in a bid to end the ugly scenes from last week where healthcare workers were seen using torches while attending to patients. The new back-up generator was being installed by the time of publishing this story.

“New 500 KVA (kilovolt-ampere) generator installed, the old 150 KVA Generator also serviced and will serve as a substitute to the new generator,” a brief statement by the county government said.

The governor further made mini cabinet shake-up. Ibrahim Abdi was initially the CECM for Finance and Economic Planning. He was moved to the Health Services while Abdirahman Mathaw was moved from the Revenue and Resource Mobilisation to Medical and Rehabilitative Services.

Mathaw was moved from Afya House by the former governor and his return came as a reprieve to many since he’s believed to be the official who brought back sanity at the department before he was moved to another sector.

“He is a human being and obviously doesn’t lack shortcomings, but Mathaw is a competent and hardworking man. Just give him two weeks and see how things change,” Jibril observed.

People close to Governor Werar told Kulan Post that the county chief vowed to “rid Afya House of cartels” and warned politicians against using the health department as a tool to fight him.