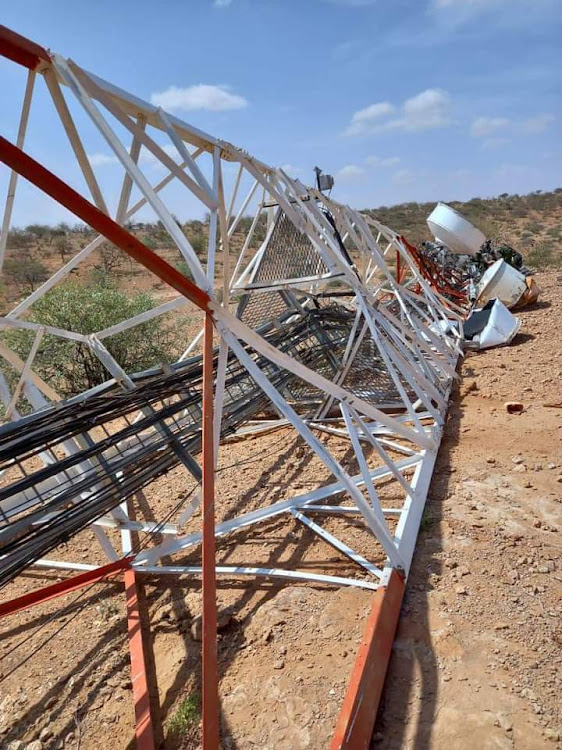 MANDERA—Militants believed to be al Shabaab have last night attacked and destroyed a communication mast in Omar Jilo, Mandera leaving many out of reach.

Witnesses said there were dozens of men roaming the area before and after the attack. No injury was reported after the Friday incident.

Officials said they are aware of the presence of the gang in the region and efforts to counter their activities are ongoing.

This includes deployment of more personnel to the region bordering the Kenya-Somalia border and using residents to fight their activities.

Security officials said January is usually the time many of the locally militarised terrorists and those sent from Somalia try to send a message.

So far up to four terror related incidents have happened in the stretch. The incidents claimed 12 lives.

They include the killing of a civilian on new year’s, seven people and four police officers in Lamu county. The attacks are linked to terrorism and local politics.

“The latest attacks are being carried out by al Shabaab grassroots cells. These devolved jihadists operations are planned and carried out by native members of affected areas, locally radicalised and backed by trained al Shabaab cells,” an official aware of the operations said.

The official said counter terrorism operators understand that both traditional and devolved jihadism are carried out by dangerous persons determined to carry out what they believe is a religiously mandated struggle against evil.

On another news, at least four police officers were on Monday killed when a vehicle they were traveling in was targeted by gunmen in Liboi, Garissa County.

According to police statement, the officers were traveling in a Toyota Probox when they ran into an ambush between Liboi and Kulan area.

The assailants are believed to be from Somalia and have reportedly left with the officer’s guns.

“They were ambushed and shot before being robbed of their weapons. It was an ambush,” said an officer aware of the incident who spoke to the Star newspaper.

“The officers were robbed of three AK47 rifles and unknown number of bullets,” the report comfirmed. The incident is the latest to happen in the area.

North Eastern police boss Rono Bunei said they had intensified operations in the area to tame the militant’s movements.