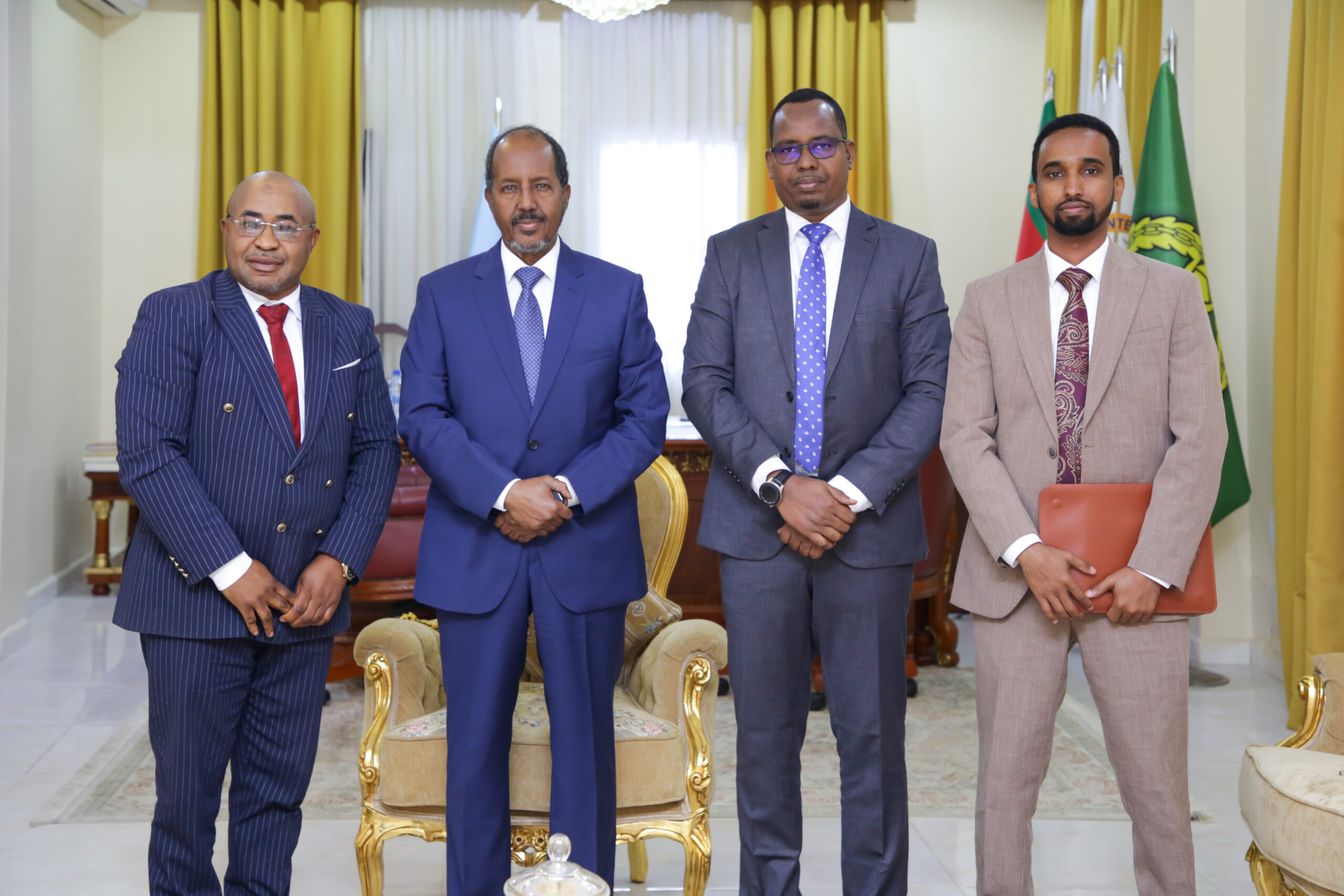 The President successfully defended his PhD dissertation in Peace, Governance, and Development at United Nations University for Peace (UPEACE). He will take part in the graduation ceremony as the first head of state of Somalia to earn the highest academic degree and the first sitting Head of State to graduate from UPEACE.

In 2018 when UPEACE began offering its program in Mogadishu, President Hassan Sheikh was one of the first students to enroll in the university’s doctoral program.

“I successfully defended my dissertation at UPEACE and got my PhD in Peace, Governance, and Development,” said President Hassan after undertaking extensive courses, comprehensive and independent research.

An educationist himself who worked in the sector for nearly three decades, he asserted that: “Education can reconstruct our nation and government. We wish to simplify and reduce the cost of education.”

A group of graduates from United Nations University for Peace UPEACE celebrate their milestone during a graduation ceremony held in Mogadishu, Somalia on 21 September 2021.
[UN Photo / Mukhtar Nuur]

According to Somalia’s Minister for Education, Culture and Higher Education Farah Sheikh Abdulkadir Mohamed, the President’s actions “Serve as an example for youth, seniors, and the entire Somali community.”

Dr. Hussein Sheikh Mohamud, the Chief of Staff of the Presidency—a graduate with a doctorate from UPEACE—reflected on the manner in which his the president balanced work and academic life despite running one of the busiest office.

Dr. Hussein added that education is at the heart of the president’s agenda and has taken it upon himself to demonstrate the centrality of education, particularly higher education.

Dr. Hussein added that along with his other commitments to accelerate reforms in the security, judiciary, and socio-economic sectors, president Hassan Sheikh will commission and launch several initiatives impacting and transforming the education sector as a whole, particularly higher education.

“We worked with him, and we were inspired by the way he managed his time. This helped us get better at our jobs as state officials and also helped us grow as people,” Dr Hussein noted.

Before joining politics, Dr. Hassan Sheikh Mohamud pioneered and taught at SIMAD University in Mogadishu. He also worked in community development and peacemaking. This gave him first-hand experience on how hard it is to build a state after a war. As part of putting together the new government in Somalia, President Dr. Hassan Sheikh has taken important steps toward education and development. He is now in his second term.

The dissertation defense presented at the university by the President prompted positive comments from social media users.

According to Professor Samuel Kale Ewusi, Director of the Africa Regional Programme “His efforts are recognized with the completion of his PhD by his Excellency. He added that “anything is possible if committed and pursed with passion and hard work.”

Professor Ewusi explained that the goal of his program “is to prepare a new generation of African leaders”. He added that: “President Hassan gives hope to the Horn of Africa, which is full of tragedies, both natural and human.”

Prof. Ewusi explained that the Master’s and Doctoral programs at UPEACE teach future leaders how to do research and come up with strategies and methods for human capital development, peace and security, and environmental sustainability.

According to a pact seen by Kulan Post, the university where the president of Somalia defended his dissertation would invest more resources and partnerships in global peace, governance and climate change in a bid to reduce carbon emissions and global warming.

The University for Peace (UPEACE) and Fifty Shades Greener—leading environmental educational programmes—signed an MoU earlier this month in Geneva on peace and environmental protection.

The University will host a significant commencement ceremony for more than one hundred master’s and doctoral students at the end of this academic year.

Dr. Mohamed Osman expressed joy at President Hassan’s role as an accomplished academic and politician who diligently pursued his doctorate.

Dr. Mohamed Osman reported that President Hassan urged young people and potential leaders to seek education and personal development. According to Dr. Mohamed, the UPEACE commencement will be exceptional.

Hundreds of Costa Ricans and Africans will be there to witness the graduation of 140 MAs and 15 PhD candidates.

According to Dr. Yusuf, President Hassan Sheikh enjoys campus and research life and encourages students to complete their PhDs.

Dr. Yusuf recalled the President’s campus speech on the need for advanced education and the transmission of information for reconciliation, state building, diplomacy and development.

“My student (President Hassan) demonstrated leadership and humility while in campus” Dr Mohamed stated, adding that the president is a “stateman.”

President Hassan persued and completed his studies at the backdrop of vicious election campaigns, drought and famine.

The University for Peace (UPEACE) was established through UN General Assembly resolution 35/55 of December 5, 1980, globally to lessen the obstacles to peace as enshrined by the United Nations Charter.

The President of Somalia, Dr. Hassan Sheikh Mohamed, signed the instrument of accession during the 77th session of the United NationGeneral Assembly, making Somalia the 42nd nation to sign the UPEACE charter.

There are over 2,000 alumni from 120 countries who have graduated in Master’s and doctoral degree programs at UPEACE, an institution created to prepare future leaders.

In late 2018, UPEACE expanded its operations to Somalia and aims to build a fully-fledged campus in Mogadishu to aid Somalia’s post-conflict recovery.

Last year while marking the International Peace Day, 76 students graduated with Masters from Mogadishu’s campus. The ceremony was attended by James Swan, the Special Representative of Secretary General of the United Nations for Somalia and was presided over by the Dean of UPEACE, Professor Juan Carlos.

As Somalia recovers from decades of civil strife, UPEACE has become the only international institution with a physical presence in Somalia to offer a PhD in Peace, Governance and Development.

On September 30, 2022, at the 34th Council meeting of UPEACE in Geneva, UPEACE signed a new MoU with UNHCR. The MoUs emphasized peace education, migration and multi-sectoral development.

While in Geneva, the University re-elected the current Rector, Francisco Rojas Aravena for the third team in recognition of his unrelenting efforts to make UPEACE a premier peace and development education center within United Nations.