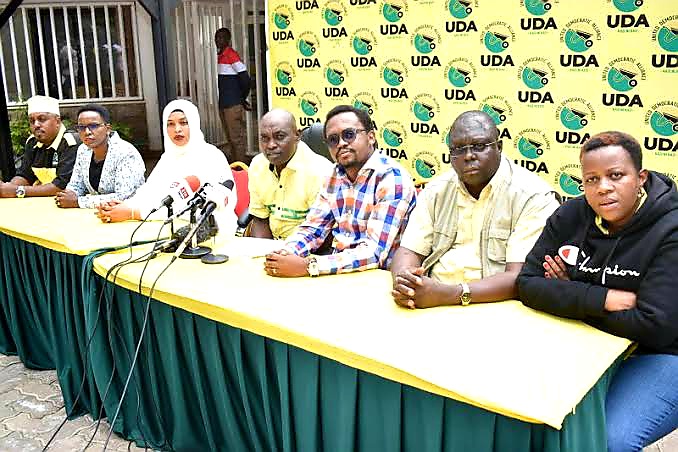 WAJIR—There was drama earlier today at the offices of the Independent Electoral and Boundaries Commission (IEBC) after two candidates vying for the parliamentary seat presented similar UDA nomination certificates allegedly issued by the party for clearance.

In an unexpected turn of event, Siyad Jimale, the publicly declared nominee by the party for Eldas parliamentary elections, was informed that another candidate, Omar Haji Salat was earlier cleared.

After a heated debate, the IEBC officials directed the two candidates to seek reprieve from the UDA elections board.

In a statement, the youthful aspirant Siyat Jimale said the “shocking” information and how his supporters were treated, came as a surprise to him.

“To my dismay and that of my supporters who were kept at bay by the security officers manning the gate of Eldas CDF hall, I was informed by the IEBC official led by the returning officer, Alibashir that they have already cleared a UDA candidate yesterday while it is in the public domain that I am the de jure UDA nominee for Eldas Parliamentary seat.

“On the same breath, the purported candidate they have cleared is Omar Hajji Salat whom I have defeated him hands down during the UDA nomination process on 27th of APRIL, 2022,” the statement seen by Kulan Post read in part.

In a Facebook post to his page, Omar Abdille conceded and further congratulated Siyat for the victory after the party issued the certificate to Siyat. Siyat believes junior party officials colluded with IEBC officials, without the knowledge of the top party organs, when Omar’s name was submitted as nominee.

“When I inquired what transpired from the IEBC Returning officer, he had no any other excuse but confined the whole thing into a party issue when I know very well that UDA has submitted the right list, listing me as their sole nominee for Eldas Parliamentary seat.

“Therefore, I can conclude that money must have exchanged hands within the electoral body (IEBC) at the national level affirming the rumor that the current MP, Adan Keynan will block me from the race,” he noted.

Journalists were reportedly denied to record the unfolding event. At one point, Siyad Ismail, a journalist working with the digital outlet Asal Media “was harrased and denied entry into the hall with his equipment.”

We could not reach Omar for comment by the time of publishing this story.

UDA party officials are expected to solve the matter from Tuesday as the IEBC awaits direction on the right candidate to be cleared.