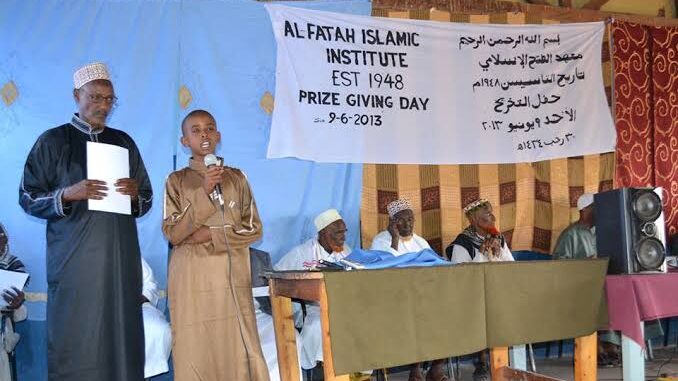 NAIROBI—Another milestone has been attained in the education sector after the approval of the Madrassa curriculum by the government.

The development of the new curriculum was a joint effort spearheaded by Muslim Education Council (MEC), in partnership with Muslim organizations, scholars and educationists.
Kenya Primary Madrassa Curriculum the first of its kind in the history of the country joined the list of government approved curriculum after endorsement of the Kenya Institute of Curriculum Development (KICD).

The 2013 Basic Education Act recognizes madrassas and duksis (Islamic schools in the Somali community) as formal schools and the approval of the curriculum now set pace for the development process for the secondary Madrassa Curriculum that has already started.

For decades, there has been no widely accepted and recognised madrassa curriculum to guide teaching of Islamic education in Kenya.

The all-inclusive process involved wider consultations from stakeholders and took into consideration the various views pre- sented to develop the syllabus.

The curriculum taskforce publicized the process widely and invited participation, suggestions and comments from all interested Kenyans. The use of the press and the social media ensured that information had a wider reach. The task force also
went to the counties to give an opportunity to Kenyans in the grassroots to participate in the process.

While expressing his gratitude, the Muslim Education Council (MEC chairman Muhammad Zafar Niaz lauded the Kenya Institute of Curriculum Development (KICD) for the endorsement of the Madrassa curriculum saying is a milestone for the country’s education history and in the Muslim community.

The MEC chair further appreciated the unity and harmony exhibited by various stakeholders during the madrassa curriculum development process adding that the official launch of the curriculum will be held next year during National Muslim Education conference on a date to be com- municated.

“I appeal to all stakeholders who made
their contributions towards the success of the process to maintain the same spirit to ensure the approved curriculum is fully implemented for the benefit of our children for proper growth and spiritual development,” Niaz said.

Niaz noted that with the major work of implementation of the curriculum and training of Madrassa teachers about to start, there was need for the leadership of madrassas and duksis to improve on the infrastructures as a measure to provide a conducive environment for the learners.

On his part, executive director Muslim Education Council (MEC) Munawar Khan said the development and subsequent approval of the Madrassa curriculum is successful history in the Muslim community in Kenya and the East Africa region as a whole and that the new curriculum would be piloted countrywide.

“The process to develop a unified madrassa curriculum has been a long journey and successful history in the Muslim community in Kenya and the East Africa region as a whole. This has been achieved with the commitment and support from various stakeholders and Muslim organizations,”’ Munawar Khan said.

In his remarks, Dr. Ahmed Yusuf who headed the taskforce that spearheaded
the curriculum development process, thanked all the stakeholders for their timely input and cooperation saying without their commitment the proposed curriculum would have not be realized.

He said the KICD was ready to work and train Madrassa teachers with a long term aim of developing a common examinations system for Madrassa and Duksis schools to be facilitated by KNEC.