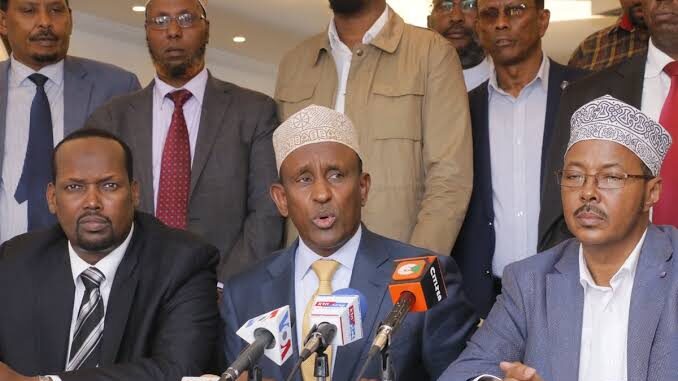 NAIROBI—Allies of President Uhuru Kenyatta and his estranged Deputy William Ruto were yesterday split in the middle on the political direction the Northern Kenya region should take ahead of the 2022 elections.

In a move to scuttle Ruto’s influence in the region, Uhuru’s camp backed by allies of ODM leader Raila Odinga and One Kenya Alliance (OKA) principals announced a formation to be known as UPYA Movement, a primary political vehicle to chart the region’s 2022 political direction.

Leaders who included Cabinet Secretaries, Principal Secretaries, Chief Administrative Secretaries and elected leaders said the movement which has the backing of State will be the primary political vehicle through which Arid and Semi-Arid regions will engage in national political negotiations.

Addressing a press conference at Serena Hotel, Nairobi, Treasury Cabinet Secretary Ukur Yatani described UPYA movement as a grassroots-oriented and participatory drive established on the need by leaders of the ASALs region to be speak with one political voice on behalf of their electorates.

Yatani said the movement which is departure from the past groupings where ASAL leaders pulled in different direction, will unite residents from ASAL areas to articulate a common political position and objectives for the 2022 elections.

“We wish to confirm to the country that those of us in government as CS, PSs and CASs alongside governors, senators and MPs declare accordingly the formation of a united political movement to be known as UPYA movement,” CS Yatani said.

“Our voices as a region has not been coherent in terms of galvanizing our support and getting together to participate in a political discourse, we have agreed to take ourselves seriously for the benefit our people to ensure the current political discourse we are not left behind,” CS Yatani added.

The CS disclosed that the formation will support the political direction President Uhuru and Raila alongside OKA principals will provide ahead of the 2022 General Elections.

“We will support the Alliance being crafted by the President which involves Raila and OKA principals, but we will also be fighting for their space at table not at the menu,” he held.

Sources at the meeting however disclosed that the newly launched  movement which has the backing of the state is likely to run into headwinds after the political leaders failed to agree on who between CS Yatani and Eldas MP Adan Keynan who doubles as Joint Parliamentary Jubilee Coalition Parliamentary Secretary should lead the group.

Opinion was divided as one group pushed for installation of Yatani as the de facto leader of the movement against the wishes of Keynan’s wing which favour him due to his seniority as a long serving legislator from the region.

“Adan Keynan should lead the UPYA movement and represent us in the discussion in various political groupings ahead of the 2022, he is experienced and articulate,” an MP from Wajir was quoted telling the meeting.

This even as Garissa Township MP Aden Duale dismissed the group christened “Northern Kenya Leaders Forum” of attempting to shape what it called the political direction of the Northern Kenya region, move he said is doomed to fail.

Duale, a close ally of Ruto, accused the national government of ignoring critical issues like the drought, food and water shortages and insecurity which is ravaging the pastoralists.

“The national government has a constitutional role to deliver timely service to its citizens, that includes the pastoralists of Northern Kenya and should do so immediately to avert the looming crisis instead of promoting political agenda that has no value addition to well-being of the pastoralist people,” Duale, who doubles up as Pastoralists Parliament Group (PPG) patron said in a rejoinder.

“The Government should not divert attention from the ravaging Drought, Insecurity and Marginalization facing our people.

Our brother Ukur as the Minister In charge of Finance must deliver to his people and not play politics,” he added.

Nevertheless , Keynan, a close ally of President Uhuru has  defended the UPYA movement saying it will bring together like minded leaders keen on seeing ASAL areas develop as an integral part of Kenya.