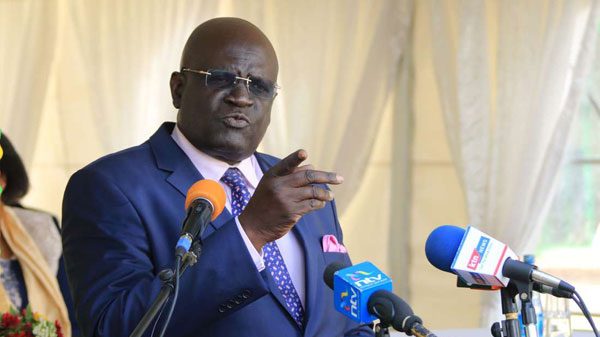 EDITORIAL—Today we are reacting to two generally identical statements by the Cabinet Secretary for Education, Prof. George Mogoha and the newly appointed Northeastern Regional Commissioner, Nick Ndalana claiming that the locals “collaborated with Al Shabab” before an attack that killed three teachers at Kamuthe Primary School in Fafi sun-County on Tuesday was carried out.

Prof Magoha “challenged the local communities to come clean and stand with teachers posted in the region.”

Ndalana, on his part, pointed at a collaboration between locals and the militants in planning of the attacks.

“People will not come all the way from the border all the way to Kamuthe without knowledge of the locals, I personally see a conspiracy between the group and our locals,” he said shortly after the attack.

Similar sentiment was later echoed by the chairman of the second largest teachers union, KUPPET who vaguely claimed that the teachers were victims because of their religion identities.

Despite the blanket condemnation of an entire community and outrageous accusation that has far-reaching implication on how the region is seen despite bearing brunt of the attacks, both RC Ndalana and CS Prof Magoha are yet to unveil how the local communities collaborated with the Somalia based militant group Al Shabab in carrying out the attacks.

This latest attack comes barely a week after the Shabab killed four pupils from Saretho Primary School in Garissa and left three others with injuries. The victims were all locals.

At this juncture, we think the officials were playing to a pre-conceived notion that the locals are in support of the attacks, a pedestrian ussumption that has no official document backing it.

We think their statement was ill-timed and could set off negative inter-religious sentiments and xenophobic backlash on people of the Somali origin.  Such sensitive rhetoric should not have came from a government minister and top official representing the office of the President in the region.

If at all the locals were “collaborating” with the militants, why did they allow four of their children killed in the most horrific way?  How will the families of the children feel when they hear such statements by top government officials. How could they have planned the demise of their own children?

It can not be ruled out that the militants use local contacts to plan the attacks on their targets, but even the local residents are caught by surprise and vastly terrified by the blood-lettings. They always express outrage and demand for answers only for the same government to accuse them of being behind their ordeals.

Such outrageous, blanket and baseless accusations create resentment— a viable tool of appeal used by extremists to package and present their message of hate and own version of religious scriptures

Secondly, the locals have not been provided with a secure channel of communication through which they can relay intelligence—actionable or otherwise. Despite the glaring danger of retaliation by the militants, the locals, at their best, report imminent attacks.

KUPPET chairman Omboko Milemba on Wednesday during media briefing at Uhuru Park detailed how the teachers were informed of the impending attacks and how section of them sought safety away from their stations.

He said that the police did not provide security for the teachers who did not heed the warning provided by the locals. The evidence of untapped local support system is established. Can Prof Mugoha and Ndalana provide evidence of locals “collaborating with the Shabab?”

Al Shabab is not engaged in conventional warfare. To them, it’s a battle for the hearts and minds of Kenyans in their push to blackmail the State to withdraw the Kenya Defense Forces from Somalia. How else do you explain the fact that they kill Muslims and Somalis in Somalia and pretend to save Muslims and Somalis in Kenya? Don’t let Al Shabab enjoy the upper-hand in this psychological warfare.

Officials should be sensitive and extremely careful not to offend or upset any group of people in society who have a disadvantage, or who have been treated differently over the years because of how different they look from the rest.