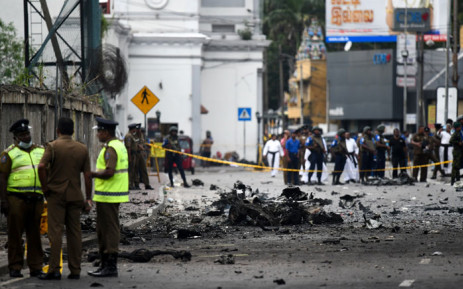 The bombings killed over 200 people (Courtesy)

Until this week, Sri Lanka did not have much history of Christian-Muslim violence. The two faiths are both small minorities and have lived in harmony: The country is about 7% Christian, 10% Muslim, 13% Hindu and 70% Buddhist. But after the civil war ended in 2009, militant Buddhism began to surge. Some observers have said it was as if powerful forces in Sri Lankan politics were looking for a new enemy to fight. Hard-line Buddhist monks targeted churches and mosques, priests and imams. Its been a budhist oppression of the two minorities.

So let’s get to the bottom of this, shall we?

The photos of the alleged bombers of Catholic churches and hotels in Sri Lanka are coming from a ISIS-related entity called Amaq News Agency and are provided to the media by Rita Katz, an Israeli agent working out of Bethesda, Maryland. Why is this Amaq hidden? Why is it related to ISIS. Yet is Jew? Why is it that Amaq News Agency has no website and has to rely on the one Israeli agent Rita Katz of Site Intelligence Group to distribute its material to the media? The clip has their brand on the right hand corner.

The Israeli posted the propaganda video of the terrorists swearing an oath. These are supposedly the Sri Lankan terrorists, but they don’t sound like Tamil speaking people either.

Rita Katz the Israeli who owns hasbara media outlet seems to always have information about these so called terrorists FIRST hand!! I wonder why?

Rita Katz and SITE have been publicizing alleged first scoop on many terror events for about a decade.
CNN quotes this Israeli woman’s propaganda outlet as the source of this video and still pics derived from it too.

ISIS was created by Mossat and Al Qaeda by the CIA. They create False Flags globally, to create State sponsored staged terror operations and blame the attack on Muslims. This is pure evidence. Truth unveiled. ISIS is financed by the US and Israeli governments and Rita Katz is a name that has become synonymous with False Flag Attacks against Muslims.

Now u know who is behind the horrific #SrilankaBombings